The first written mention about Bělá comes from Cosmas chronicle, where is written that the castle of Přimda was built on the rock near of Bělá in 1121 A.D. The village was founded on the junction of the Bezděkov brook and the Radbuza river (or the White brook which probably gave the name to the village). Another theory connects the name of the village with two local salt sources. The development of Bělá was determined by its location on one of the Middle Ages business road from Horšovský Týn to Bavaria. In the Middle Ages, the German inhabitants were more numerous than the Czech people and so the name of the village changed to German name Weissensulz.

Bělá belonged to the domination of royal castle Přimda until the end of 16th century. Bělá was one of the centers of Primda Chods who had their “town hall”. Lamingens from Albenreuth got Bělá in 1600 A.D. They built a local fortress with a brewery and a big farm in 1614. Later Bělá was connected to the domination of Újezd Svatého Kříže (Újezd of St. Cross) and a manor in Bělá became just an office centre. From the 17th century, there were founded about ten glass works; some of them ware working until the beginning of 20th century. Most of inhabitants of Bělá worked in agriculture, timbering or handmade work.

After 1945, almost all inhabitants of Bělá and its surrounding were displaced and a lot of border villages have never been renewed.

It was built by princess Metternich obviously between 1723 and 1725 according to Charles bridge in Prague. The bridge has eight arches and six statues of the saints. They are Virgin Mary Immaculate, St. Michael, St. Wenceslas, St. John from Nepomuk, St. Erasmus and St. Antonio from Padova. The bridge was a traffic construction and also a cult place. There were taken place saint’s days and worships. 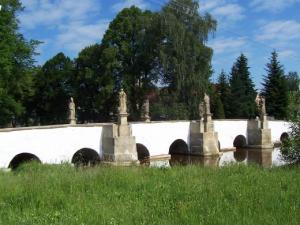 The Church of The Finding of The St. Cross in Újezd Svatého Kříže

The monks who were settled in Black Hill (according to a myth) inspired a foundation of this church. They maybe were missionaries who came from east-west to expand Christianity to Slav area. When they moved to monastery in Pivon they dug foundations for a sanctuary to serve to the people of Újezd. According to the myth, an iron cross was discovered during the digging the foundations. The monks sent it to the pope and bricked in a stone cross to the tower of the church. 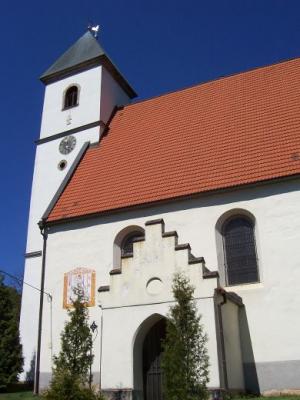 The ParishChurch of Virgin Mary Painful

Between 1696 and 1697 a chapel of Virgin Mary was built in Bělá nad Radbuzou. But soon it was not adequate and so it was extended – it is reminded by the inscription in the entry portal from the year 1721. The chapel was burnt in 1826. The owner of Bělá manor rebuilt and enlarged it. In a box in the tower, there was deposited a document – “In the spring 1827, highborn imperial independent lord Wenceslas Koc from Dobrsch, the chamberlain, the knight of imperial Austrian order of St. Leopold, the upper sergeant of c. k. army, the owner of the manor Újezd Svatého Kříže, Bělá nad Radbuzou and Železná, the gracious sponsor of this church, established this tower and cover it by a metal place. God bless him and his descendants.” The last reparations were made in 1993. 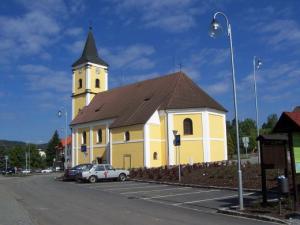